The residential city Gotha is located in the green heart of Germany, in Thuringia – a town with the special flair of history and future. Gotha is the former capital and residential city of the Dukedom Saxe-Coburg and Gotha. Marked by a brilliant history the town has is own aura: the historic centre and the Friedenstein Castle - Germany’s biggest Early-Baroque castle complex with a park - landmarks and at the same time impressing events. Wide park areas in English style, the Orangery, the Friedenstein Castle, the Ducal Museum as well as bourgeois houses are fascinating the visitors.

“The Baroque Universe of Gotha” at Friedenstein Castle brings past centuries to
life as only few other castles or museums can. In the heart of an extensive park, the imposing castle, with its many different historical rooms, the Baroque Ekhof Theatre and the chapel, and also its unique collections covering art, nature and history, has survived almost unchanged. The history of Friedenstein Castle dates back to the Thirty Years‘ War. From 1643 onward, the Protestant Duke Ernst I of
Saxony-Gotha, known as Ernst the Pious, built what is now Germany‘s largest Early Baroque castle in just twelve years on the ruins of the demolished fortress of Grimmenstein.

The Duke gave the new castle the symbolically signifi cant name of Friedenstein (“rock of peace”), heralding a new era. The art chamber, established when the castle was built, formed the nucleus of the wide range of collections which are
today housed in several museums, the research library and the Thuringian State Archive. As part of an extensive restructuring of the Gotha museum
landscape, the collections have been reorganised since 2009. The Ducal Museum, built in 1879, will display the art collections from 2013, and the Museum of Nature will present more and more of its treasures in new permanent exhibitions in the castle. The project has generously been
supported by the Federal Republic of Germany, the Free State of Thuringia and the City of Gotha. 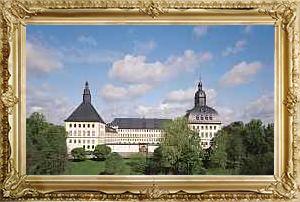 Today, the castle houses three museums: the Castle Museum, the Museum of Nature and the Museum of History. The Castle Museum contains the magnifi cant ducal chambers with their original furniture from the 17th to the 19th century, which stretch across two wings of the giant castle on the
second fl oor. The Court of Gotha was of major cultural importance and was frequent ed at one time by Goethe, Voltaire, Frederick the Great and  Napoleon. In the Castle Museum, visitors can marvel not only at the historical furniture, but also at precious clocks, porcelain, paintings, coins, and much more. The Art Chamber contains superb exhibits made from gold,
silver, ivory, amber and nautilus shell, East Asian artefacts and curiosities, such as one of the few original Napoleon hats in the world. It is not only the Baroque culture of living which comes to life during your visit. 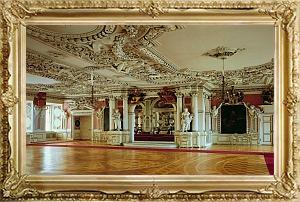 Since 2010, the fi rst permanent exhibition of the Castle‘s new Museum of Nature, „Animals in the Tower“, has presented animal exhibits in various departments,
such as the Rain Forest, Night, or Antarctic. Penguins, tigers, lynxes, sea lions,      flamingos, owls, sloths and many other animals can be seen in a presentation which is ideal for families. But the natural history collections, established in 1640 under Ernst the Pious and continuously expanded since then, are considerably more extensive. Further fascinating treasures and curiosities from a natural world
that dates back millions of years will gradually be displayed over the next years in new permanent exhibitions, such as the planned Natural History Collection. 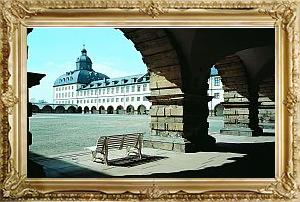 The Castle also contains the Gotha Museum of History, founded in 1872, which tells the story of Gotha and the surrounding region from prehistory to the 19th century. The permanent exhibition focuses on the economic history and the everyday life of ordinary people. The Reformation, the Peasants‘ Wars, Absolutism and the development of the arts after the Enlightenment are described in detail. Graphics, paintings, household goods, toys, militaria, clocks and watches, musical
instruments, fashions and astronomic equipment from the Museum‘s extensive special collections are on view. 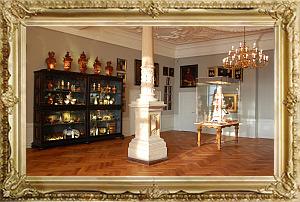 One of the castle‘s particular treasures is the Ekhof Theatre, built in the West Tower between 1681 and 1687. It is the only theatre in the world with functioning stage machinery from the 17th century. Important actors such as Conrad Ekhof and August Wilhelm Iffl and performed here in the 18th century. The Ekhof Festival from the end of June to the end of August presents brilliant theatrical art in an authentic Baroque setting. 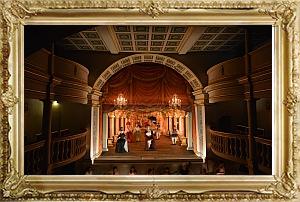 The Ducal Museum was built south of the castle in 1879 to provide a prestigious location for the numerous collections which had found international recognition by then. Between 1950 and 2010, the building housed the Museum of Nature. From 2013, the Museum will provide a suitable exhibition setting for the art
collections. It will present signifi cant works of art from antiquity to modern times, including one of the oldest Egyptian collections in Europe with mummies and burial artefacts, works by Old German masters (such as the “Gotha Lovers” and important works by both Cranachs), a Netherlands collection, sculptures from Jean-Antoine Houdon, works by Rubens and Caspar David Friedrich and porcelain from Meissen, Thuringia and Asia. Changing exhibitions will display the treasures of the Graphics Collection, including drawings by Martin Schongauer and
Albrecht Dürer, or a special collection of pamphlets from the 15th to 17th centuries.

Friedenstein Castle is surrounded by a wonderful and varied park landscape which presents an attractive picture at any time of the year. The Baroque orangery opens up in summer like a fl owering theatre towards Friedrichsthal Castle. An
English landscape garden was created by Ernst II of Saxony-Gotha-Altenburg, when he had the massive fortifi cations around the castle fi lled in after 1770. The lake, a temple to Mercury, and the “Holy Island” where several members of
the ducal family are buried still convey the impression of a typical English Garden which Goethe once described in a poem as “heavenly”. 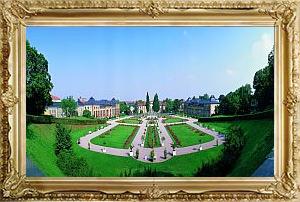 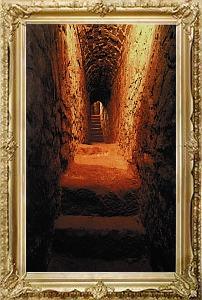 Enjoy a special event with a trip by Thuringian Forest Line from Gotha–via Waltershausen-Friedrichroda–to Tabarz! The comfortable journey (25 km) leads you via Boxberg along many sights through the fairytale Thuringian Forest. The last stop is the idyllic resort Tabarz at the foot of the 916 m high Inselsberg. The journey takes about one hour. 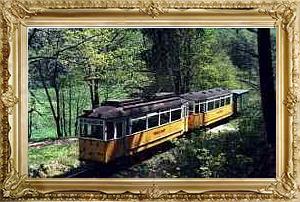 Not far away located from Gotha is the castle landscape “Drei Gleichen”. 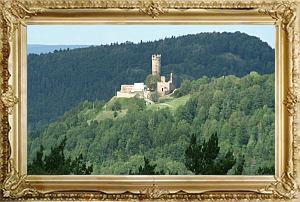 The over 1250-year-old Erfurt shows the Middle Ages set in stone and has one of the largest and best preserved town centres in Germany. Not to be missed are the impressive background of the Cathedral St Mary and Church St Severus to the timber-framed houses along the Cathedral Square (Domplatz), the house-bridge Merchants’ Bridge (Krämerbrücke) - completely preserved and the longest of its kind in Europe - the town houses of the rich along the square Fischmarkt, the traditional garden exhibition egapark or the recently recovered fortress Petersberg - only a handful of the impressive sights in Erfurt, the capital of Thuringia. 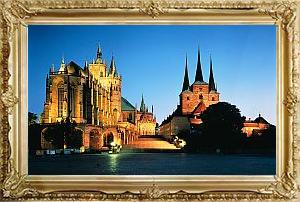 Wartburg Castle near Eisenach is one of Germany’s most famous castles and the only one to be a UNESCO World Heritage site. The castle also has an influential historical significance. It was here in 1521 where Martin Luther, during his exile, translated the New Testament from Greek into German. Luther’s study can still be visited along with the rest of the breathtaking castle. 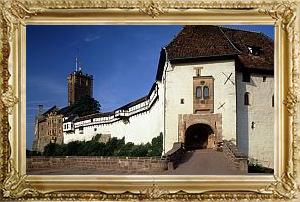 The Saalfeld Fairy Grottoes are entered in the Guinness Book of Records as the “most colourful show grottoes in the world” and among the best-known sights in Thuringia. 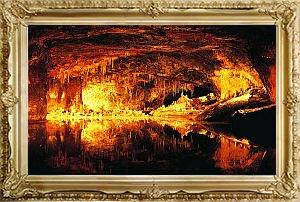 On a length of 310m visitors will have in the nationalpark hainichland a wonderful view from the top of the trees. The entire construction of the treetop path will consist of two main modules, a tree tower and the path. The tree tower will reach over the treetops and end with a tree house and an open platform at a height of 44 meters. With an outside stairway the visitor can climb the tower and experience elements of the environmental formation on three storeys inside the tower. The actual path will have a length of 306 meters begins in 24 meters height and leads the visitor in one wide arch back to the tower. The plant is complemented by a footbridge which opens up from the tower in 21 meters height. 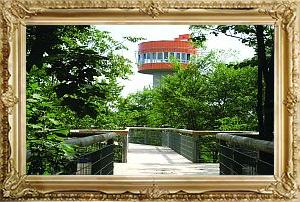 The Inselsberg with its 916 m is not the highest mountain in the Thuringia Forest, but the most well-known. From here you can have an amazing view. 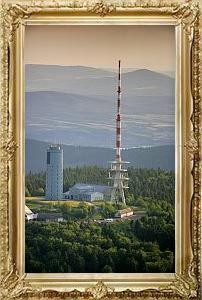 From over 60 meters the water is falling down into the riverbed. 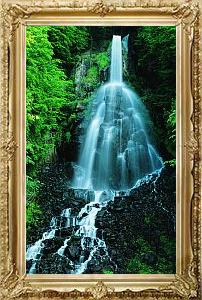 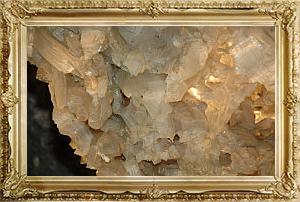 The Cultural Capital of 1999 hardly has a single street or lane that does not reflect the interesting and exciting history of the town. The bronze statues of Johann Wolfgang von Goethe and Friedrich Schiller in front of the German National Theatre have been a tourist magnet for many generations. Along with the inner-city „cultural mile“ and a total of 27 museums, amongst them the Goethe National Museum and the Bauhaus Museum, this town on the river Ilm is a popular destination in Thuringia. UNESCO has adopted an entire 14 different objects into its list of World Heritage Objects! Tourists are also fascinated by the wonderful palaces and parks in and around Weimar which give the city a really “green” character. 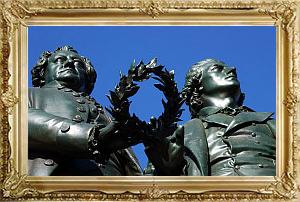